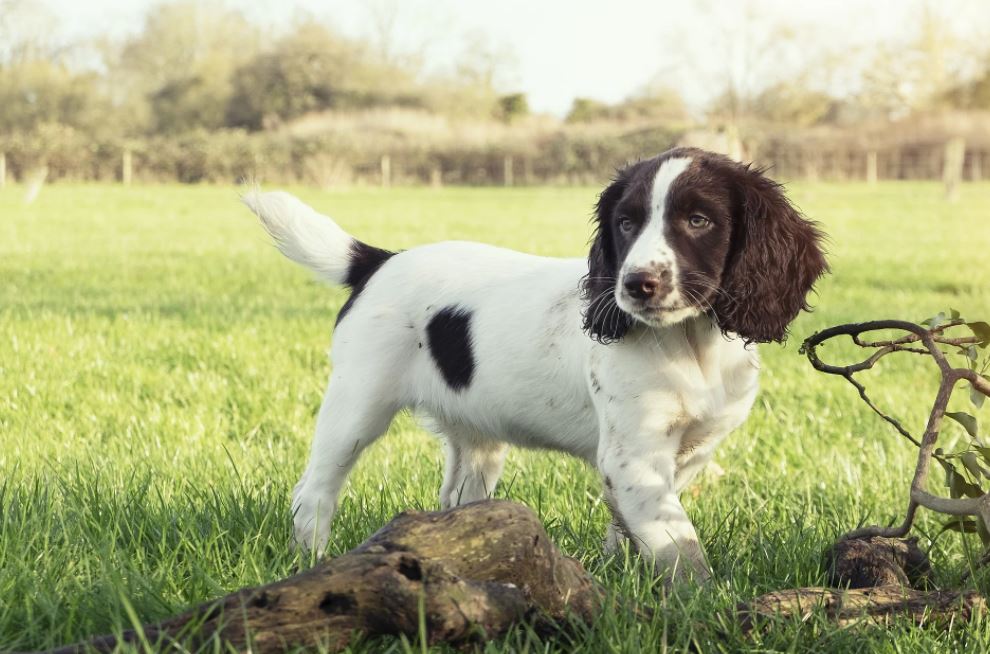 English Springer Spaniels are smart and enthusiastic animals who are eager to please and are known for their energetic, happy and humorous personalities.

These dogs are a firm favourite amongst sport hunters and were named after the way they ‘spring’ at game. In addition to this, they have a reputation for making wonderful family companions who get along well with children and even other pets, if they are brought up with them from puppyhood.

In this article, we will become better acquainted with this rugged breed of Spaniel who was bred to work closely with humans.

According to American Kennel Club, Welsh and English Springer Spaniels were originally classified as the same breed and were first noted as a separate breed in 1902.

However, these dogs date back to at least the 17th century when, before the invention of the wheel-lock firearm, Springer type spaniels worked in conjunction with hunters to bring down prey.

The English Springer Spaniel eventually rose to prominence in North America during the 1920s as resilient as well as dapper hunting dogs and are now recognised as the 26th most popular dog breed in the US.

It might surprise you to find out that these days, as a result of their keen nose, amenable nature and durability, they have even been used in K-9 detection work to great effect.

These furry family members are the tallest of their breed, but still possess all the hallmarks of the classic “Spaniel” look, namely; lush hanging ears, large and revealing eyes, moderate snouts with a distinct stop to the forehead, and last but not least, docked tails.

They are medium-sized dogs with well proportioned, athletic bodies endowed with beauty, endurance as well as utility; and are sporting dogs through and through.

As we’ve mentioned above, Springers are highly trainable people-pleasers; they get along very well with children as well as other animals and welcome the opportunity to join in on family activities.

They are active dogs who don’t do well in kennels or stationary lifestyles.

Some of their favourite pastimes include swimming, long walks, as well as games of fetch and chase; and as such, due to their lively and outgoing personalities, these dogs will become miserable when their exercise and social needs aren’t met. However, this also means that they will make excellent hiking, jogging and camping companions, among other things.

English Springer Spaniels originally gained popularity as gun and hunting dogs, when they were used to chase birds into flight so that hunters would then shoot. This comes as a result of their impressive speed as well as endurance. In addition to this, they also have the ability to retrieve animals.

Furthermore, they have a reputation for making excellent police as well as show dogs and are currently known for being ranked third in the list of breeds who have won the most “Best in Show” awards at the Westminster Kennel Club Dog Show. Renowned for their affable dispositions, these curious and energetic tail-waggers make amazing companions who get along brilliantly with children, other pets and even strangers when socialized from an early age. Adding to this, their agreeable nature makes them highly adaptable to a variety of roles and situations.

If you’re an outdoorsman- or woman, this might be just the dog for you. These four-legged friends are known for being lively as well as thriving on vigorous athletic activity and would welcome the opportunity to join you on a hike or hunt.

Highly Intelligent And Easy To Train

As we’ve mentioned previously, English Springer Spaniels are highly intelligent mammals who are eager to obey as well as fast learning, and as a result, they are relatively easy to train and have been reported to make excellent show and sporting dogs.

As a consequence of their resilient, sweet and athletic nature; English Springer Spaniels are well-rounded dogs whose versatility make them suited for a variety of potential roles including, but not limited to, hunting, sporting, show and guard dog work as well as family companionship.

English Springer Spaniels are extremely energetic dogs who tend to become despondent when left inactive for too long, and as such, they will require at least 1 to 2 hours of vigorous exercise daily to provide mental as well as physical stimulation, which can be a difficult need to meet if you aren’t a particularly active person yourself.

Top tier English Springer Spaniels have been sold for exorbitant prices as high as $3,000 and up. Unfortunately, the expenses don’t stop there and these furry companions require high-quality dog food to support their active lifestyles. Luckily, their selling price depends upon the pup’s age, sex, quality, pedigree, as well as the breeder’s location, and some have sold for lower prices ranging from $800 – $1800.

From separation anxiety to susceptibility to metabolic diseases, hip as well eye problems, and what is thought to be a rare neurological disease manifesting as extreme dominance and aggression; English Springer Spaniels can be risky in the health department. Other potential issues include Retinal Dysplasia, ear infections, skin disorders and Progressive Retinal Atrophy, or PRA for short. Luckily, they are generally considered to be healthy dogs.

Unfortunately, these dogs won’t be a good fit for someone who wants a low maintenance dog, as they require frequent, vigorous exercise as well as regular grooming in order to reach their full potential. They also tend to become depressed when left isolated or inactive for too long and will need to be checked for infections and other potential health concerns; which could be difficult to accommodate for first-time pet owners. If you want a companion who thrives on athletic activities, is peaceful around other pets, gets along well with humans, is medium-sized, sturdy and has an easy-going nature; the English Springer Spaniel is the right dog for you.

These mammals don’t have an overly aggressive nature and won’t frighten or overwhelm people with their size, but they are also sturdy and good-natured enough to tolerate rough play.

English Springer Spaniels will need enough room to satisfy their energetic and curious personalities. They will also benefit from activities that can hone their natural instincts as hunting dogs, like retrieving or sniffing games and swimming.

Furthermore, extensive exposure to people, as well as unusual sights and sounds from an early age, will be hugely beneficial; as obedience instructors have encountered English Springer Spaniels who are anxious, suspicious and sometimes even aggressive as a consequence of poor socialization.

Coat care will be another pressing concern with these dogs and you, or a groomer, will need to trim and clip their coats every few months to keep them neat, sanitary and free from tangles as well as feathering.

Last but not least, English Springer Spaniels have been known to suffer from separation anxiety; and as such, it is of the utmost importance that they are afforded proper care and a great deal of companionship.

It might come as a surprise to you to find out that English Springer Spaniels have made appearances in 16th-century art; in fact, there are a variety of paintings from this era featuring dogs that look strikingly similar to our sprightly, tail-wagging friends.

Other interesting tidbits about four-legged companions include; them being omnivores (meaning they eat both other animals and plants) as well as the fact that there are two variations of this breed, namely: bench and field.

As a final point of interest, many celebrities have been Springer owners and these include George W. Bush who had an English Springer Spaniel named Spot as well as George H.W. Bush who had one named Millie.

Other famous English Springer Spaniel owners include Oprah Winfrey, Princess Grace and even William Wallace, who was immortalized in the film Braveheart and the commander of the Scottish army during the First War of Scottish Independence in the late 13th century.

You can find out even more about these iconic dogs by watching this video. In conclusion, these intelligent, agile and friendly people-pleasers make amazing pets who could be family members for more than a decade, but may not be the best fit for someone who wants a low maintenance pet.

English Springer Spaniels are often bought without any clear understanding of the requirements that go along with owning one, and it is important to remember that owning a dog is not only a responsibility but a privilege.

At a minimum, dogs will depend on you for food as well as shelter but deserve and require much more, and it is important to understand what this commitment entails.

Remember, dogs are individuals just like humans and you will need to choose the breed and the specific individual that is best suited to your needs as well as the best fit for your living environment.

These dogs require a fair amount of time and work to meet their dietary, exercise, and grooming needs.

We hope that you’ve enjoyed learning about this esteemed dog breed and that you haven’t been discouraged by the obligations that go along with owning one.

Remind yourself of the fact that you are capable of great things if you put your mind to it; and owning a pet can be an extremely rewarding as well as enriching experience, which can lead to massive strides in personal development and growth.

We hope this article has satisfied your curiosity and warmed you up to the idea of acquiring an English Springer Spaniel or pet companion.